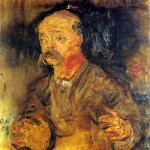 On May 2, Leo Lensing attended a screening of A Little Pocket Mirror, a documentary on the Austrian writer Peter Altenberg (1859-1919), at the Neue Galerie in New York. The British art historian Gemma Blackshaw and the award-winning filmmaker David Bickerstaff collaborated on the project. Lensing is one of the consultants interviewed in the film, which includes footage of several objects from his collection of Altenberg’s manuscripts and inscribed photographs.