An article by Olivia Drake 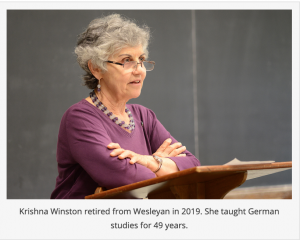 The American Association of Teachers of German (AATG) recently named Krishna Winston, Marcus L. Taft Professor of German Language and Literature, Emerita, an honorary fellow of the association. The fellowship is limited to 25 fellows worldwide.

Founded in 1926, the AATG has nearly 3,500 members and “believes that bringing the language, literature, and cultures of the German speaking-world to all Americans is a vital humanistic endeavor, which serves an essential national interest,” according to its website.

To receive this honor, Winston was nominated by 10 colleagues, with the nomination approved by the Honorary Fellows Committee and voted on by the Association membership at its 2019 annual meeting. According to the AATG, honorary fellows are “men and women of letters of international distinction who have contributed to the advancement of German studies in the fields of literary studies, literary criticism, linguistics, creative writing, translation, and second language acquisition.”

Iris Bork-Goldfield, chair and adjunct professor of German studies, made the initial recommendation. She’s known Winston for more than 20 years.

“Krishna has devoted her life to the German language and literature. With her many celebrated translations of works by Golo Mann, Siegfried Lenz, Peter Handke, and of course Günther Grass, just to name a few, she has enabled millions of English speakers to appreciate German literature,” Bork-Goldfield said in her nomination letter. “Apart from being a brilliant translator, Professor Winston has educated generations of American students as a teacher of German. She is a passionate teacher, deeply committed to her students whom she inspires to enjoy German literature, study abroad in Germany, apply for scholarships to teach and /or do research in German-speaking countries, and become engaged citizens.”

Winston, who retired from Wesleyan in 2019, recently published a volume of four film narratives by Werner Herzog, Scenarios III (University of Minnesota Press, 2019), and has just completed translations of a novel and an essay by Peter Handke. Her translation of the address Handke delivered upon receiving the 2019 Nobel Prize can be found on the Swedish Academy’s Nobel Prize website. She is currently working on another Handke essay.

Winston remains actively engaged in campus life. In the fall of 2019, she taught her First-Year Seminar “The Simple Life?”, and she continues to serve as an advisor to the Community Standards Board, support the University’s sustainability efforts, and participate in the nomination process for Fulbright, Watson, and Udall fellowships.

“Krishna Winston has been a great source of motivation and inspiration for everyone around her, in the US and in Germany,” Bork-Goldfield said. “Her lifelong dedication to promoting German, be it as a teacher or a translator, complemented by her and her social activism, makes her an ideal honorary fellow.”