Skip to content
The following letter, criticizing Michael Hofmann’s review for The New York Review of Books of Jonathan Franzen’s The Kraus Project, appeared in abridged form in the December 19, 2013 issue of the Review. What follows is the original version, which at the request of the editor was reduced by more than two-thirds. 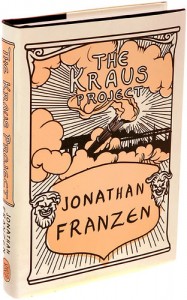 Michael Hofmann has a handful of perceptive things to say about Jonathan Franzen’s The Kraus Project [NYR October 24]. Most notably, he recognizes that it represents a unique experiment, “a strange, space-bending, Cubist, not unsimpatico book.” Unfortunately, this and other insights are buried in a misinformed, crudely formulated screed hurled at Karl Kraus, a writer whom Hofmann gives ample evidence of not having read carefully.

Hofmann “supposes” that The Last Days of Humankind is Kraus’s “chef d’oeuvre” even though this firmly established judgment of literary history need not be the object of hunches and maybes. The great anti-war drama, documentary and visionary in equal measure, not only directly influenced Brecht’s theory and practice of Epic Theater, but also set a powerful example of modernist textual collage that helped shape the famous political photomontages of John Heartfield as well as Alfred Döblin’s great city novel Berlin Alexanderplatz. Hofmann seems not to realize that the play consists of more than things “heard or overheard by its author”; it also appropriates posters sighted, advertisements copied, films viewed, and countless newspaper clippings pasted onto the manuscript page before being satirically transformed into self-revealing dialogue. The play is consciously constructed in excess of “the conventional five acts” to which Hofmann reduces its form; it also contains a prologue and an epilogue, which, incidentally, brings the scene count to 220, not “209.”  Hofmann thinks that the play is “from 1917,” whereas it was actually published in four special issues of Kraus’s satirical journal Die Fackel (The Torch) in 1918-1919 with the expressionistic epilogue coming first. The red covers and the documentary photograph of Wilhelm II used as the frontispiece of “The Last Night” (the title of the epilogue) gave it the initial impact of a revolutionary pamphlet. Kraus continued to revise and add new scenes based on information suppressed under war-time censorship until the first book edition appeared in 1922.

Hofmann’s notion that the play is “rarely read, much less performed and only translated (thus far) in abridgment” is wrong on all counts. Beginning in the 1960s, a dtv two-volume paperback and, since 1986, the 848-page Suhrkamp edition have, together, sold thousands of copies in Germany.

Even though The Last Days of Humankind—at fifteen hours or ten evenings—has understandably not been a staple of the German-language repertory, productions have not exactly been rare. It might be more accurate to say, intermittent with increasing frequency in times of war. There have been countless staged readings and radio broadcasts since the 1960s. Full-scale productions have occurred less often, but have regularly inspired theatrical experiments of great intensity. In 1983, the Scottish playwright and director Robert David MacDonald staged his own translation of the play with the Citizens Theatre of Glasgow, which became the sensation of the Edinburgh Festival in that year. In 1991, Luca Ronconi, amplifying Kraus’s comments about the mechanization of everyday life accelerated by the war, created a furor by staging the play along the assembly lines of the former Fiat factory in Turin. Johann Kresnik’s 2003 version used an even more spectacular and daunting setting, a massive World-War-II-era submarine bunker in Bremen; this production had to be repeatedly extended and eventually reached a hundred performances.

Although there is thus far only a pair of abridged English versions of The Last Days of Mankind, complete translations exist in French, Italian, Hungarian, Spanish, Portuguese, and Japanese among other languages. Losing wars apparently quickens the appetite for the entire text of the drama.

Hofmann’s jumble of misperceptions about The Last Days of Humankind constitutes more than a refusal to observe philological and literary-historical niceties. It is symptomatic of his failure to understand the drama’s importance for the “Kraus Project.” While the literary essays on Heine and Nestroy may be the focus of the book, Franzen explains that they were originally an auxiliary assignment in a seminar about Kraus’s masterpiece offered at the Free University in Berlin in 1982. His description of the often comic dynamics of this course—a  patient, overly indulgent professor jousting and haggling with authoritarian leftist students, many of them all talk and no text; Franzen and his fellow students struggling to prepare a report on the monstrous drama—really does form part of a “bildungsroman about a clever and ambitious young man on a Fulbright in Germany,” just not the “entertainment” version that Hofmann thinks Franzen should have written.

Not content to dismiss Kraus’s dramatic masterpiece, Hofmann also belittles another entire genre in which he produced highly original work. Does Hofmann really believe that the aphorism is “not a robust and jolly English commodity,” but rather “a sort of Franco-Balkan form, La Rochefoucauld meets E. M. Cioran or Lichtenberg”? Leaving aside this mispotted history of the genre, what about Nietzsche, whose influence Kraus denied with suspicious vehemence, and Oscar Wilde, whose work he embraced and published in Die Fackel? Kraus’s aphoristic work has had a more vigorous afterlife in the English-speaking world than Hofmann realizes although he unwittingly explains why when he summarizes: “Just as Shakespeare seems to be full of quotations, so Kraus is full of aphorisms” – one has only to add “and quotations from and allusions to Shakespeare.” Hofmann the poet has also missed W. H. Auden’s energetic championing of Kraus and his inclusion of a disproportionate number of his aphorisms in A Certain World, his “commonplace book.”

For Hofmann the translator, Franzen’s rendering of Kraus’s texts is “overliteral and a little wooden throughout,” a judgment that ignores the sustained scrupulous attention to linguistic nuance, allusion and wordplay for which Franzen enlisted the expert assistance of the Austrian novelist Daniel Kehlmann and the American Kraus scholar Paul Reitter. Rather than dumbing down Kraus’s complex prose, Franzen throws himself into reproducing and explicating its complexities. Surely, this is preferable to flagrant re-writing, for which Hofmann himself has been taken to task in the Times Literary Supplement [March 2, 2001] and in these pages. As J. M. Coetzee remarked of his translations of Joseph Roth, “is it part of the translator’s job to give his author lessons in economy?” [NYR February 28, 2002]

Ultimately, Hofmann thinks it doesn’t matter because Kraus’s writing is “too artificial, too conniving, and above all too squalid” to be considered “brilliant.” He aims to demonstrate this point with four substantial quotations from the essay on Nestroy. Whether these passages actually lack brilliance is at least open to question. But why not choose a quotation from the essay on Heine—Hofmann’s “darling,” whom he is otherwise anxious to defend—for example, this one:

A person who makes fun of his adversary’s sex life is incapable of rising to polemical power. And a person who ridicules his adversary’s poverty can make no better joke than this: Platen’s Oedipus would “not have been so biting if its author had had more to bite on.” Bad opinions can only make bad jokes. The play of wit and word, which compresses whole worlds of contrast onto the tiniest of surfaces and can therefore be the most valuable kind of play, must, in Heine’s hands, as in the hands of the dismal Saphir, become a slack pun, because there are no moral funds to underwrite it.

This is neither artificial nor conniving, and the squalor comes with the homophobia and the misplaced ridicule directed at the poet August von Platen. As it happens, Hofmann does cite a single phrase from the same page where Kraus cites Heine’s text; “two words,” all, he implies, that he has “taken away from Kraus”: “schöne Köchin,” “a crooked female cook” in Franzen’s rendering.

In a long concluding paragraph, Hofmann indulges in a giddy riff about this “skewed cook,” in which he explains that Heine is “protesting his love of women.” He would rather “have” a misshapen lower-class female than “the most aesthetic aesthete,” as Hofmann willfully renders the original “der schönste Schönheitsfreund” (“the most beautiful friend of beauty”). In a footnote, Daniel Kehlmann explains that in this context Heine’s persona is clearly saying that he prefers a coarse woman to the most beautiful “gay aesthete.” Does Hofmann really not know that when he exclaims “Goodness, how I love my ‘schiefe Köchin’!” he is mimicking the homophobic voice of Heine’s narrator, or does he just not care? Perhaps this is simply more evidence of careless reading. As for many other things, Kraus had a solution for this problem, too. “One has to read my pieces twice, in order to acquire a taste for them. I don’t mind, however, if one reads them three times. But I prefer that they not be read at all rather than only once. I would just as soon not take responsibility for the mental congestion of a bonehead who doesn’t have time.”