On March 19, Leo A. Lensing gave a lecture at the Embassy of Austria on

Demolition Man: Karl Kraus and the  “Deconstruction” of the Coffeehouse Myth 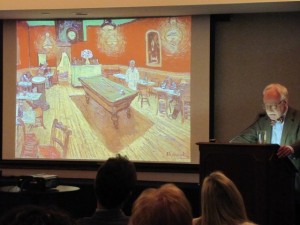 No other great culture is as intimately associated with the coffeehouse milieu as what has come to be known as “Vienna 1900,” the era of Freud and Wittgenstein, of Klimt and Schiele, of Schnitzler and Hofmannsthal, of Adolf Loos and Josef Hoffmann. Yet the 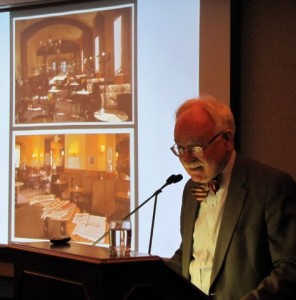 Viennese coffeehouse was not merely an architectural project, an actual meeting place or a literary topos. It often represented a hotly contested “marketplace of ideas.” Karl Kraus, whom many consider the greatest satirical writer of the 20th century, undoubtedly enjoyed the sociability and intellectual exchange fostered by the coffeehouse. But he also viewed this typically Viennese institution as a symbolic location of dubious reputation.  The coffeehouse figures in his work – from the early satirical sketch. A Literature Demolished, which took its inspiration from the razing in 1897 of the famous Café Griensteidl, to his great anti-war drama The Last Days of Mankind (1922) – as an often comic stage upon which cultural superficiality and ideological corruption reveal themselves.