Eva Mesler ’21 GRST and BIOL double major received honors for her thesis: “A Tale of Two Systems: An Analysis of German and American Healthcare Systems and their Contributions to Coronavirus Death Rates.” The thesis details the historical development of the healthcare systems in both Germany and the United States over the course of the late 19th and into the 20th century. It then uses the insights gained from this analysis to compare and explain the variation in German and American responses to the coronavirus, focusing in particular on how each country provided care to those who fell ill. For her excellent work in German Studies, she received the Scott Prize. Eva is also the recipient of a German Academic Exchange Service Fellowship (DAAD), which will enable her to attend the Health Economics Master’s program at the University of Cologne or a similar program at the Technical University in Munich starting this fall.

Alla Kiperman ’21 GRST minor and DANC major took online classes from her home in Vienna, Austria, last semester. She worked along three students from Munich University as Professor Bork-Goldfield’s Teaching Assistant. She met with beginning German students once a week practicing German. As the culmination of her Dance major and German Studies minor at Wesleyan University she has developed a dance theatre piece titled “A Portrait of Jenny.” This is a character exploration based on “Pirate Jenny” from Bertolt Brecht’s Die Dreigroschenoper or The Threepenny Opera. Alla’s interest in this particular character and play was sparked during her German Studies tutorial with Prof. Bäumel in Spring 2020, which was focused on Brecht and other prominent German playwrights of the 19th and 20th centuries. Challenging Brecht’s alienation effect through the lens of theatre and dance, she was aiming to give Jenny’s character a voice and make her story heard. It is a story of love, lust, pain, abuse, gender violence, betrayal, and overcoming: a story for all the “Jenny’s” among us and within us. Here is a YouTube link to a short teaser trailer of “A Portrait of Jenny” (https://www.youtube.com/watch?v=aNtpGRHWNnw).

Over the summer Alla is planning to continue teaching dance at a local dance studio in Vienna, Austria, participate in various acting and dance workshops, take deep brea

ths, and enjoy some well-deserved time off with her family and friends. 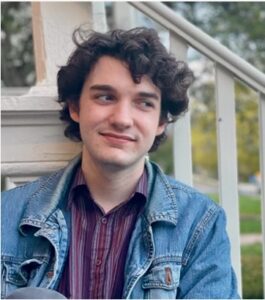 NGL major and GRST minor was brave enough to become the producer of our WesGerman podcast. He received the Blankenagel Prize for his dedication to German. This summer he will be applying for a Fulbright Teaching Fellowship to teach English in Germany.

by Anna Tjeltveit (see below) last month  for the WesGerman podcast. Iris shared  her thoughts on writing music and sharing her German song, “…ist es so weit?” (… is it time?)

Anna Tjeltveit ’23 GRST and ENGL double major submitted outstanding and really fun music segments for our WesGerman podcast. She received the Prentice Price for her excellent work in

German and her many fabulous contributions to the podcast. This summer she will be working as a camp counselor at Waldsee German Language Village, where she will teach German to campers between ages 6-17 using Immersion and Total Physical Response techniques to improve their listening and speaking abilities.

Sofia Khu ’22 GRST and COL double major will be taking a virtual class at Humboldt University with a DAAD scholarship this summer. Afterwards, she will be working on her COL thesis, a short novel which she started writing in Charlie Barber’s Longform Narrative class this past semester. It’s a Fi

lipino-American immigration story centered around the relationship between a father and son.

Tohma Mitsuya ’23 GRST minor, ANTH and COL major will be working construction and landscaping in Big Sky, Montana, with three of his friends. Aside from that, he will also be playing lots of, soccer, and basketball. He will go camping and on long hikes while brushing up on his photography. And of course, he will be reading lots of books delving into the classics of postmodern literature.